Kitchen Printer doesn't print, then prints many at once

I have a client with 4 Clover Duo's and 2 Flex's. We have 2 kitchen printers (Star SP700) set up using labels. Most of the time orders print as they should, immediately to the respective kitchen printer, but SOMETIMES, and this is not repeatable, sometimes no order will transmit to one or both of the kitchen printers. Sometimes, 30 minutes to 1 hour after the first ticket is missed ALL the tickets within that timeframe will start printing. Other times the printers simply don't print anything and when we look in diagnostics we see the printer has an error and there's a backup of print jobs.

There is no way for me to get any sort of error data from the device, and I can't hang around the restaurant all day waiting for it to break so I can connect with Support. The issue keeps coming back, but will sometimes go days between having issues. This is just standard printing, nothing custom, no 3rd party apps or anything.

My client is threatening to leave clover and I can't find any support articles discussing what to do with this sort of error.

Has anyone experienced this issue? Any advice or suggestions?

For anyone in the future: I've done all the basic troubleshooting, resetting the Clover devices, router, printers. everything is on the same network, and test prints work just fine. it's only where there's a volume of orders, but even then its sporadic.

Also, in case you didn't know, you can directly connect to these SP700's by simply using your web browser and in there you can set a fixed IP address for these devices too. (u: root p: public)

@jacobabrams I see that you're listed as a section expert and I need expert help. I've worked through L1, L2, and L3 support and the only responses I'm receiving is "look at your network", and if that's not it, "look at your ISP". Clover is the ONLY people with actual useful log data, I need more help.

New update, I contacted Star, the Kitchen Printer manufacturer, and they had me install a debugging app onto my phone. It's called StarPRNT SDK (you can find it in the Apple and Google app stores. The purpose of this app is to test a network print.

When a Clover device fails to print we immediately open the app, connect via LAN/WIFI to the same network the printers are on, then attempt to send a test print. If the print goes through that proves that our network is just fine and the problem lies elsewhere.

Well, this happened yesterday and my client sent the test print immediately after the clover device reported a print "Failure" and the print went through immediately.

Our current theory is that a print job is being sent to a printer that cannot support it. For example if an app sends a StaticPaymentPrintJob to a Star SP700 order printer. Our SP700 driver does not support payment receipts but our API in clover-android-sdk will allow the programmer to attempt this.

If that happens our centralize print job handling is incorrect, our code presumes there is a temporary printer error and retries after a minute or so, other print jobs sent to that printer will back up waiting for the oldest print job to succeed but since it was unsupported job it can never succeed. After 1 hour we delete print jobs that are unable to print, so at that point the unsupported job will be deleted and the next job in the queue for that printer will finally be attempted.

This is a problem that ideally should be fixed in the app since it intended to print meaningful that is impossible to print. Its clearly also something that can be handled better on our end, especially since a bug in one app affects all the print jobs coming from all apps.

I would recommend checking to see if you are firing print jobs look at the category of the print job, every print job class implements PrintJob#getPrinterCategory() and if you are picking a specific printer to send it to via PrintJob#print(Context, Account, Printer) check that the Printer#getCategory() matches the print job before sending the job. Ideally use the PrintJob#print(Context, Account) method instead which will find the correct printer for you where the category matches.

Clearly if its app other than yours creating the bad jobs there is nothing you can do at this time.

We will work on a remedy by dropping incompatible print jobs but it unfortunately takes a while for changes to make it to merchants devices.

One work-around without any code changes is to tell the merchant to aggressively look at the printer queue on their devices and see if there are ERRORs, if so tap the oldest job only and remove it and click Retry Print Jobs, then see if the printer starts working. Of course double check the printer isn't our of paper or other network errors, deleting print jobs of course is painful since it's not really known what is being deleted so this is a last ditch thing to try!

Here's the Rub, we're printing without ANY other custom apps. (Admittedly I did install SmartPrint by Tickett just to get SOMETHING into the mix, but the problem existed before and after the app was installed)

These print jobs are literally just a regular Clover register orders. Nothing App or API related. We're using printer labels to determine which inventory items prints to which kitchen printer. Aside from adding that app 2 days ago, this is a STOCK installation.

I will look through the inventory items to see if anything isn't applied to a label, but I really REALLY don't think we've done anything that would cause this. We've send device logs many times, are you able to review those? I'd be happy to send you the client MID, but I have no clue how to do that privately through this forum. My email is jamison@greyskymedia.com, phone 916-234-0040. Thank you!

I'm not sure if I didn't notice before, but the print failures now are affecting RECEIPTS, not just Order Receipts. 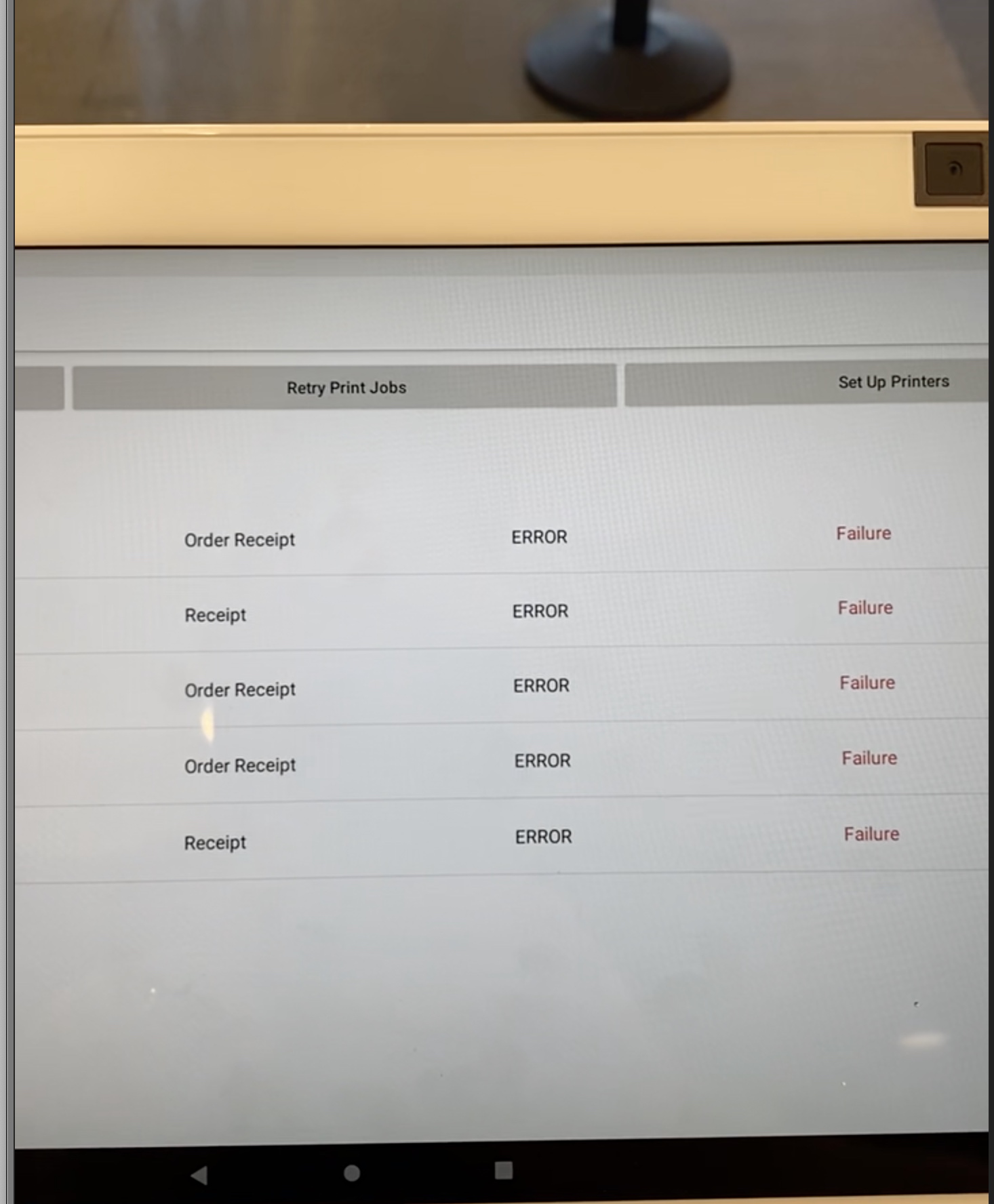 3 People are following this question.

Print through the wifi from a clover device

Does Clover Station connect to a network printer (external Printer) through Wifi. How to ?