Skip to main content
This question was closed Jul 03, 2019 at 09:46 PM by Frank Faustino for the following reason: The question is answered, right answer was accepted

How to setting up an android emulator?

We have installed clover system in emulator as steps given in link - https://docs.clover.com/clover-platform/docs/sett... that steps, after installation app launching steps is there.

In that step : 6 is in the upper-right corner, select the Configure Apps icon (gear icon). But there is no gear icon at top right in our emulator for Configure app.

Please help me hos can I launch clover apps in emulator.

Which configuration emulator did you setup?

To find the gear icon you have to navigate to
Settings > Apps > Find the settings(gear icon) on top right. Please see the image below for reference.
device-2019-05-09-211131.png

Thank you for your response.

I have configured Clover Station 17 in my emulator with Android OS 4.4.

In my case there is no setting gear icon at top right corner. I don't know why it's not appearing. Please help me if you have any idea.

Can you please share which emulator and OS you have configured so I will try with the same and it would be good if you share all configuration step by step.

I had emulated Clover Station 2018 with API 25. The steps which are mentioned on the docs are for the same. After learning that you want to emulate clover mini (1st Gen) with API 19, you should first add the clover account to your emulator and install all the clover apps.
To do this please follow the steps mentioned on the respective sites for Sandbox environment and Production(US). Copy and paste the URL of whichever environment you wish to have in your emulator on the browser and download and install clover engine and clover app updater.

Go to settings, find accounts below and add your clover account. Once the account is added you will see in your notification panel all the necessary clover apps are being downloaded, Install them. Once the installation is done go to settings, and in Device category where you are currently seeing APPS, you will have HOME option. Click and select "Launcher" for clover.

We can go through the link specified. There is not a direct way to set up the Clover developer account on the emulator.

Right now, there is a bug in the Clover App Updater on emulators where it doesn’t download all the required Clover merchant apps. From your screenshot, it looks like you might be running into that problem. The Clover team is looking into it, but until then, you can manually download and install the additional apps you need on the Development APKs page ( https://sandbox.dev.clover.com/developers/dev-apks if you’re using the Sandbox environment) the same way you installed the engine and App Updater.

The apps you need will vary depending on the functionality you want to include in your own app, but a good place to start is the Launcher.

After Clover Launcher is installed, you can open the Launcher directly. 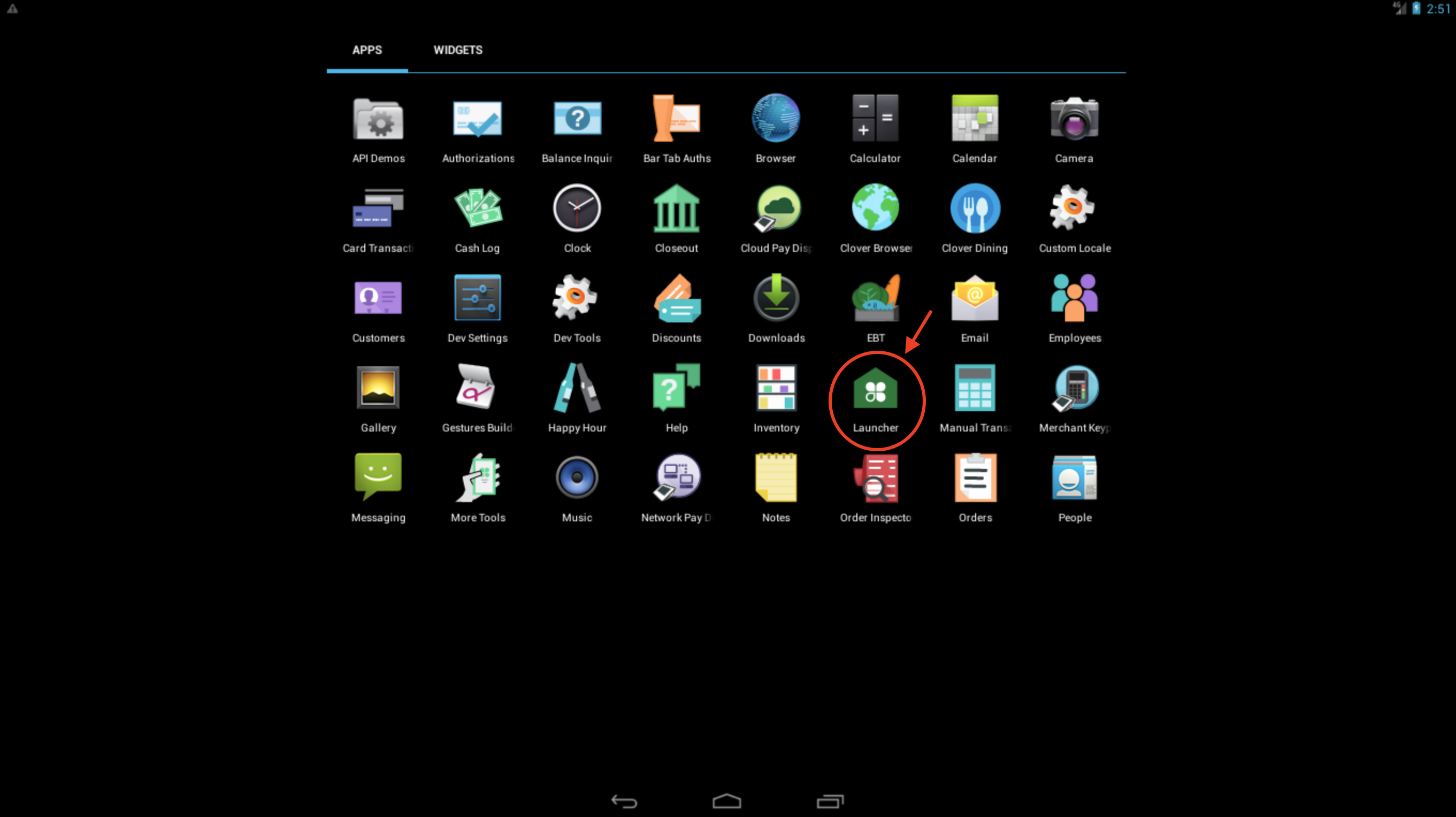 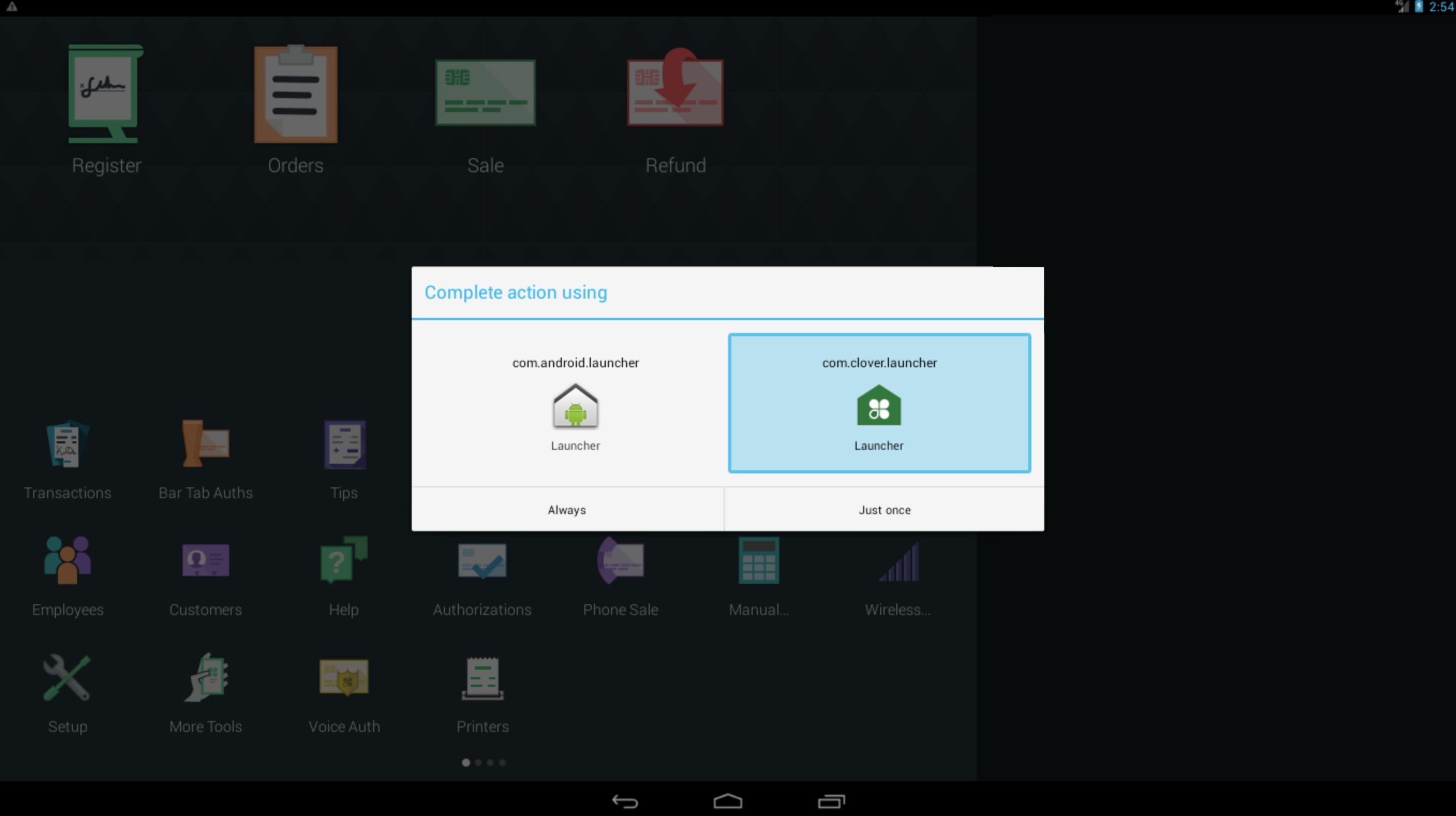 This sets the Clover Launcher as the app that automatically runs when you select the Home button. The process is a little different than described in the documentation since Clover runs on such a range of Android versions.

5 People are following this question.

Unable to login in to sandbox Timeout